Where It All Began

For everything that was written in the past was written to teach us, so that through the endurance taught in the Scriptures and the encouragement they provide we might have hope. 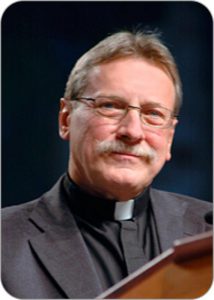 The Diakonia program was started by the Rev. Dr. Stephen P. Bouman in 1977 when he was pastor at Atonement Lutheran Church in Jackson Heights, Queens, NY. Atonement, along with a church in Connecticut (First Church in Stamford) and a church in Harlem (Central Methodist) received a grant from Union Theological Seminary for a one-year study to determine what each needed to do to reach out to the community.

As a result, Pastor Bouman developed Diakonia to take the message of the font and the altar out the front door of the church into the community. This would be a program of spiritual formation and theological education of the breadth, but not depth, of theological education pastors receive in seminary. To maintain the grassroots emphasis of the program, local parish pastors were invited to teach the courses, and the courses were offered locally. The first classes were held in Queens, New York and 6 students completed the two-year program of study in 1980.

Over the years, additional locations in the Metro New York Synod were opened (and sometimes closed) based on need. When Pastor Bouman received a call to be pastor in New Jersey, he took the program with him across the Hudson River and over the years an additional seven locations were planted in the New Jersey Synod. In 1994, with a grant from the Metropolitan New York Synod, a Latino location was developed, and since then Latino locations have been meeting in the Metro New York area.

Through the efforts of graduates who have relocated, Diakonia has been planted in other ELCA Synods. The Diakonia National Board continues to be engaged in expansion and publicity efforts in a number of additional ELCA Synods.

In almost 40 years of the program, more than 2000 persons have completed the diakonia Program course of study started by the Rev. Stephen Bouman.  At the present time, there are multiple locations in the following Synods:

The name was intentional, well thought out, and very descriptive of what was going on at the time. Tom Dorris, one of the first Diakonia graduates, who was director of communications for the LWF, and for a time the World Council of churches brought to bear the global church’s conversation around Diakonia as an essential mark of service for the church’s ministry. Several of us participated in the Faith and Order conversations on the Diaconate, led by Brother Jefferey Gros. We consulted with the Episcopal lay training Institute, the Brooklyn Diocese of the Catholic church’s office for the diaconate, and many theologians, pastors and leaders. A biblical word study of Diakonia led us to the name, and to the lifting up of the charism of “diakonia,” “service” in memory of the one who thought equality with God was not something to be grasped, but emptied himself and became obedient unto death, even death on a cross. Out in the church, for a couple of decades, Diakonia became a brand, something recognizable as new locations for the program came alive across the country. We resisted attempts by many to remake it in their own image and so the rigor, depth and scope of what was covered was fairly recognizable wherever you were in the country.